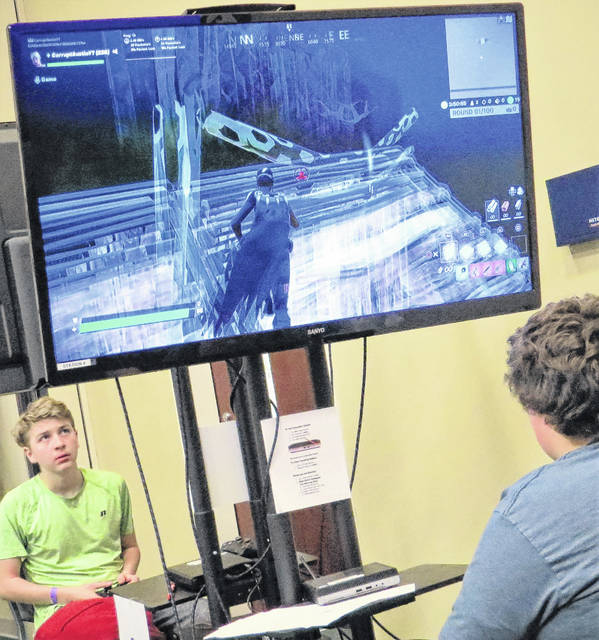 Gavin Stone | Daily Journal Arnold Wilson, left, plays against Austin Wallace in the finals of the Fortnite bracket of the first G.R.E.A.T. Gaming Tournament on Saturday. Wallace came out on top.

HAMLET — Gaming is being taken to the next level in Richmond County.

The first G.R.E.A.T. Gaming Tournament brought in about 40 competitors of all ages for a full day of intense head-to-head battles in some of their favorite games: Madden 19, Super Smash Brothers and Fortnite.

Finalists in the Madden bracket, Elijah Sanders and Karon Deberry said they had been playing the game since about the 2006 or 2007 editions. Sanders, playing as the the Seattle Seahawks, defeated Deberry’s New Orleans Saints 38-21. Sanders said his star linebacker, Bobby Wagner, was able to force multiple fumbles, and a sequence in which Sanders was able to score after a fumble and then force an interception and score again sealed the game for him.

Sanders said he plays against his friends in Madden “every day” and jumped at the chance to show his skills at the county level.

Deberry was still proud of his quarterback, Drew Brees, even in the loss.

“It was incredible, spectacular,” said Deberry of the tournament, adding that he had to come back next time. “I got to get that number one spot.”

The Fortnite semifinals featured one nail biter and one blow out. Fortnite is a relatively recent phenomenon in the gaming world in which players must forge for weapons and gather materials used to build structures that can provide cover or strategic advantage over their opponents. Each match was a 20 minute custom game that gave the players infinite ammo and materials, and all the same weapons. Wallace ran away with the victory over Jordyn McDonald, at one point taunting him by making his character dance.

Wilson and his opponent, T.J. Rucker, couldn’t kill each other for 14 minutes, locked in a furious build-battle to the top of the map. Wilson and Rucker then traded kills in quick succession and with about a minute left, Wilson said he noticed that Rucker was holding the high ground, so he stayed low and forced him to drop down, where Wilson was able to take him by surprise.

Rucker said he liked the way Wilson played. On his loss, Rucker said he played too patiently instead of being aggressive, which likely cost him the match.

“I didn’t believe in myself like I should,” Rucker said. His father, Taheed Rucker, was coaching him up afterwards. He let his son know that “you can be your own worst enemy” but encouraged him to take the top spot next time.

As soon as Wilson and Wallace were done with the semi finals they were back to 0-0 and 20 minutes were back on the clock. The two traded barbs a bit early on, but Wallace was up by 5 kills with two minutes left.

“He’s really good,” Wallace said of Wilson after the match, “and I guess I’m better.”

Wilson said Wallace was a hard player to read throughout the tournament.

“He builds faster and edits faster than me so I’ve got to get better and come back next year,” Wilson said.

Wallace and Wilson both livestream Fortnite on YouTube. Wallace’s username is CorruptAustin, Wilson’s is BurntFLYGUY.

The proceeds from the tournament all go to benefit the STEAM Camps conducted by SWELL (STEM Wellness Empowering Lifelong Learners) at Richmond Community College, which introduce young students to computer engineering and robotics concepts.

A partnership between Richmond Community College, SWELL and GameStop, the organizers are looking to make the event an annual event — at least. Ricky Locklear, manager of the Rockingham GameStop, said gaming is not just “wasting time” as parents often say, but is time spent “generating friendships.” Locklear described the games as being similar to chess where the players not only have to learn the mechanics but then have to learn to predict their opponent’s moves.

“I’d love to see more than just this area (be involved in the tournament), more colleges, the whole state,” Locklear said.

Jeff Epps, founder of SWELL, said he wants to see a shift in which teachers and parents stop dismissing the focus that students put on video games in their spare time and start working to harness it to support futures in computers and technology.

Epps said he “couldn’t be happier,” with how the event turned out.

Gavin Stone | Daily Journal Arnold Wilson, left, plays against Austin Wallace in the finals of the Fortnite bracket of the first G.R.E.A.T. Gaming Tournament on Saturday. Wallace came out on top.

In November, Google finally launched a major gaming platform that was in develop…

Platinum Games doesn’t rule out The Wonderful 101: Remastered for Xbox One

Platinum Games wanted to take The Wonderful 101: Remastered to the Xbox One as w…

What can and can’t children do if they’re on school holidays or staying home?